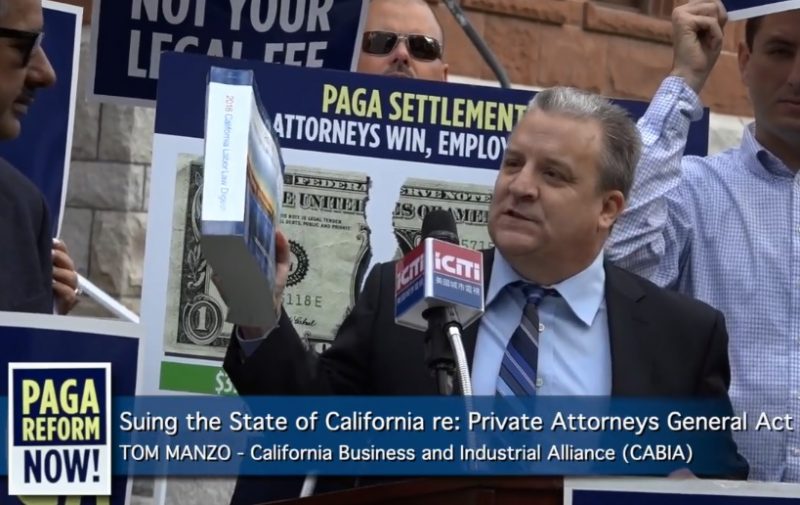 Because a legislative fix to PAGA has proved elusive, CABIA is suing the state, arguing that PAGA is unconstitutional. We want the state to enforce its own labor laws, rather than giving trial attorneys the power to do so.

A nationally recognized legal team at Epstein Becker Green authored CABIA’s groundbreaking 54-page complaint. One legal observer asked whether there might now be “an end in sight” to PAGA, and said that – because of CABIA – “the fight to end PAGA has been initiated.”

This week, my organization — the California Business & Industrial Alliance — is filing a complaint against the state to try to right this wrong.

The facts couldn’t be clearer: Rather than helping employees, PAGA has transferred the state’s power to private attorneys who operate for their own personal gain.

PAGA was conceived as a means to help employees right workplace wrongs without further burdening the state bureaucracy.

Trial attorneys quickly discovered that they could use the law for their own benefit; the penalties from small workplace clerical errors, multiplied across dozens or hundreds of employees, provide big paydays from the plaintiffs’ representatives with minimal effort.

The growth in PAGA notices has been astronomical. Between 2004 and 2008, the number of annual PAGA notices more than tripled; between 2008 and 2015, the number of notices tripled again. In 2016, more than 5,000 PAGA complaints were filed — an astonishing 1,440 percent increase from the law’s first year in effect.

Our lawsuit isn’t about letting companies skate on wrongdoing; rather, we want the state to do its job and enforce labor law violations.