Today, the California Business and Industrial Alliance (CABIA) took out a full-page ad in the Wall Street Journal holding California Labor Secretary Julie Su accountable for the state’s broken bureaucracy — including an ongoing scandal with the state’s unemployment insurance system.

Su is reportedly one of several candidates under consideration to be Joe Biden’s Labor Secretary nominee. Her track record in California should call her qualifications into question. Under Su’s watch, the California Employment Development Department (EDD) sent as much as $1 billion in fraudulent payments to California prison inmates.

These fraudulent payments are just the latest scandal for the state’s Employment Development Department. Su admitted back in April that the state’s UI system was in trouble, but problems have continued, with tens of thousands of Californians caught in a backlog of unpaid UI claims. The UI disaster even triggered an emergency audit, which found the EDD is putting millions at risk for fraud.

Su has also stood by for years while countless California businesses were unfairly targeted by lawsuits under the Private Attorneys General Act (PAGA), a unique California law that encourages extortionate behavior by trial attorneys. Failure of the Labor and Workforce Development Agency to properly review all PAGA claims has directly led to the current broken system.

Instead of looking toward her next job as Biden’s Labor Secretary, the ad argues Su should be “focused on fixing the state’s broken bureaucracy.”

Here’s what CABIA Founder and President Tom Manzo had to say about the ad:

“It’s appalling that countless Californians are still struggling to get the assistance they desperately need, while convicted serial killers have been able to scam the state out of hundreds of millions of dollars. That’s on top of misguided labor laws like the Private Attorneys General Act (PAGA) which continues to open struggling businesses up to costly and often frivolous lawsuits. Before Su considers moving up the ladder, she needs to fix California’s broken bureaucracy first.” 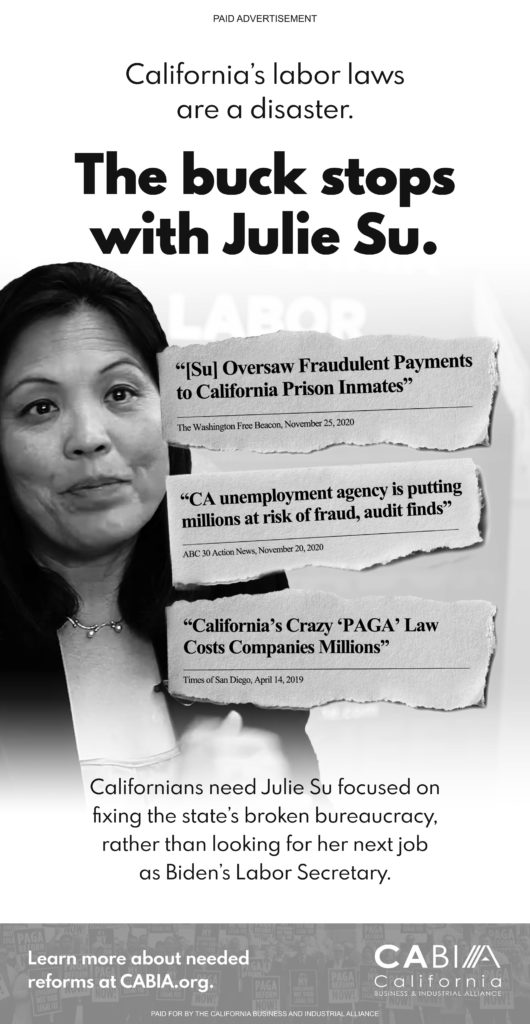